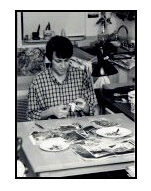 photo: Brandi EasterMaking each paper mosaic collage was a continuous process of gathering materials, cutting, and pasting. Usually something would attract my attention. This could've been a found image or a section from a color photocopy of one of my own photographs. I then would paste this down with an acrylic gel medium onto a gessoed masonite support.

All the while, I’d be rummaging through my collection of old books with reproductions of paintings and photographs, and through files of my own photos, making color photocopies of the ones that seemed useful. For the most part, I didn’t look for actual images, but for areas of color, line, texture, and detail.

From these pages, I'd cut out hundreds of little bits, many as small as an actual brush stroke. These pieces were for my pictures what dabs of paint are for a painting. They were the elements that made up the work and gave it its substance.

I glued these pieces onto the support. Nothing was usually sketched out, except for a few perspective lines on the Underground and street scenes. I worked best eyeballing it freeform. Once I was satisfied that a picture was finished, I'd go back over the top of it with a slightly heavier gel medium. This unified the surface and added to the overall texture and luminosity of the finished piece. 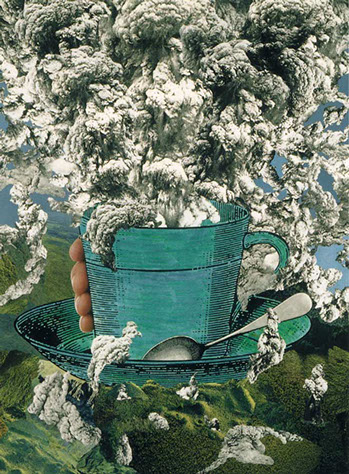 As my way of making collages evolved, I discovered that what I liked most about my medium was its almost sculptural aspect, the way the elements of the work could be blended and layered and shaped with scissors, tweezers, and acrylic mediums.

My intention was to create pictures that had the look and feel of paintings, but with the sculptural quality of cut paper work.

I’ve used photocopies in my work for years. My earlier pictures were often filled with bits taken from black and white copies of found images and textures. Later along, I mostly worked with color copies of my own photographs.

Artists have used reproductions of source material for collage and related kinds of artwork since long before the common use of photocopiers or computers. One example is Joseph Cornell (1903–1972), who often worked with photostats of images he got from the library.

Reproduction and/or use without permission prohibited.